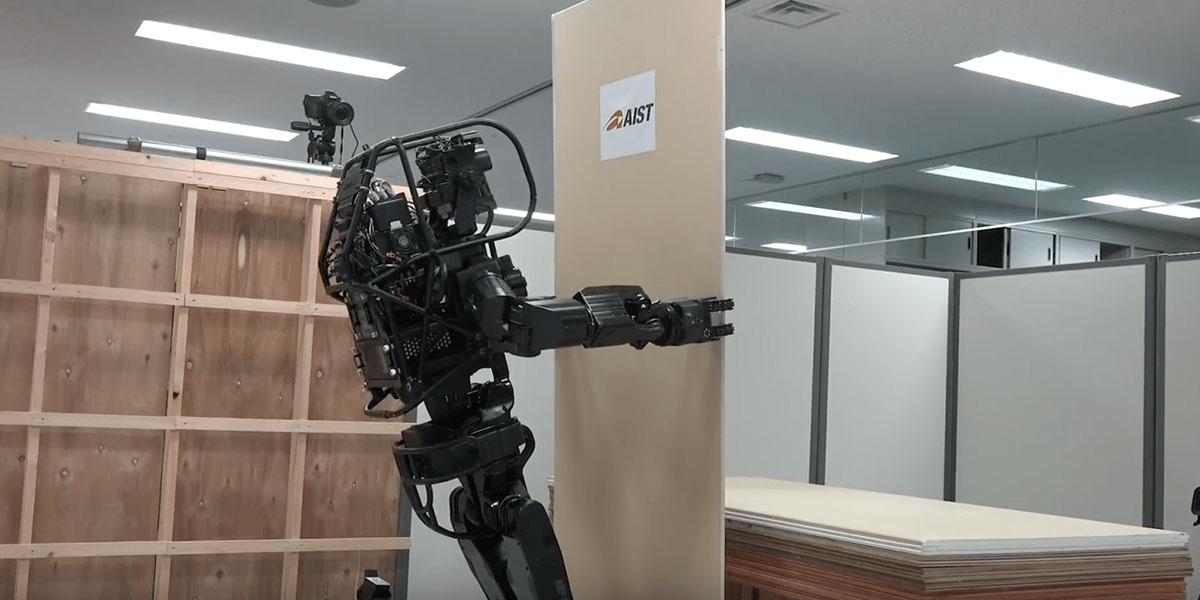 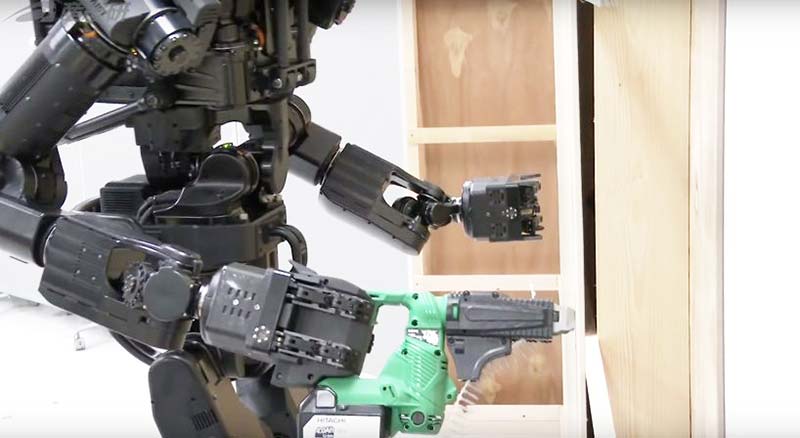 Boston Dynamics’ Atlas robot is capable of some impressive feats, but researchers from Japan’s National Institute of Advanced Industrial Science and Technology (AIST) Institute have created what looks like an eminently more practical and down-to-earth humanoid robot.

While Atlas is busy showing off its skills by performing picture-perfect backflips, AIST’s robot showcases its abilities by carrying out regular construction tasks, such as hammering up sheets of drywall. Even its name — HRP-5P — carries the no-nonsense, no-frills naming approach of a 1990’s desktop PC. 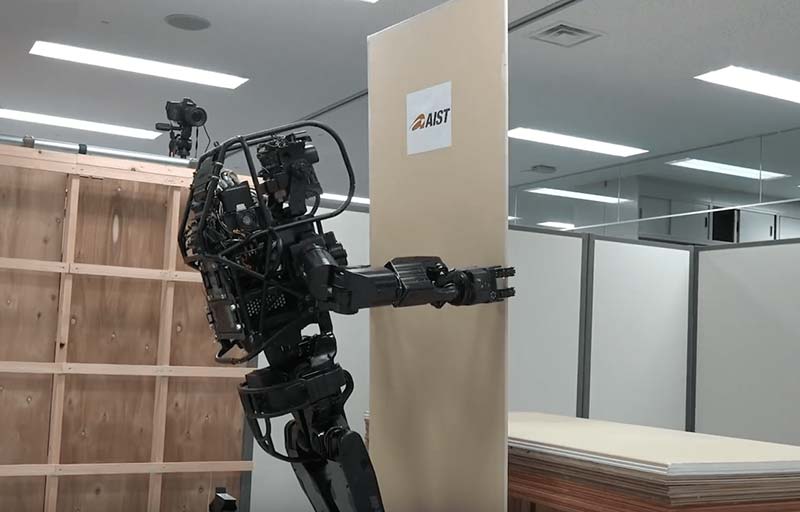 HRP-5P might be designed to carry out regular DIY jobs, but there is nothing regular about its abilities. The robot utilizes impressive object recognition, motion planning, and environmental measurement technology, such as the ability to pick up boards, place them against joists, and then secure them in place using a drill.

Robots that can replace humans at a number of physical tasks is nothing new, of course. From assembling Ikea furniture to picking berries on farms to, frankly, whatever other job you can think of, machines increasingly offer an alternative to those pesky human workers with their propensity for taking vacations and refusing to work much more than eight hours a day.

In the case of HRP-5P, the reason for its creation is a bit more location-specific, however. Japan has long had a problem with declining birth rates, meaning that there won’t necessarily be enough able-bodied young people to look after the growing elderly population. While we don’t necessarily want to put grandma in the care of a robot that is comfortable using power tools, machines such as this could one day fill gaps in the job market, particularly in manual labor areas like the construction industry.

Over the course of a year, more than 9,000 separate fires burned through 1.3 million acres of land in the state of California, according to the Department of Forestry and Fire Protection. Understandably, people are looking for proactive solutions to help avert future blazes. Could drones help? 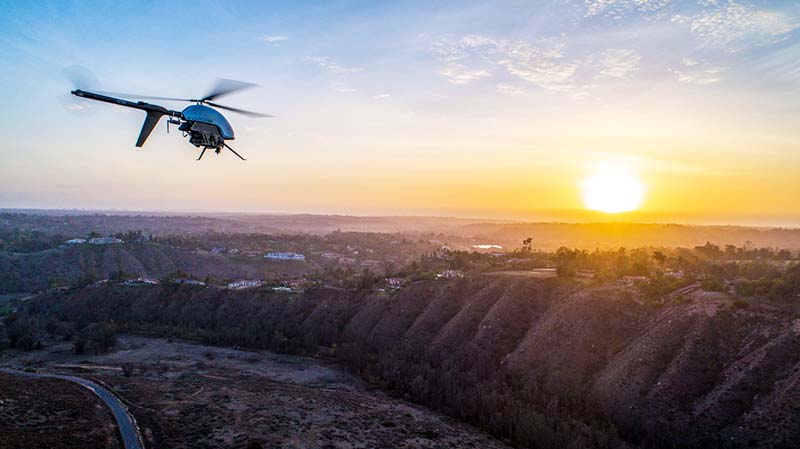 One company, Flight Evolved, is doing its part to get involved. Having long used drones to create 3D maps for utility companies, Flight Evolved has been called in by some of the Golden State’s largest utilities to find ways of avoiding another destructive season. The innovative startup uses multicopter drones equipped with LiDAR remote sensing for its work.

“If you’ve been following the automotive industry, you’ll know that LiDAR is the hot-ticket item right now,” David Ilgenfritz, owner and chief operating officer of Flight Evolved, recently told Digital Trends. “It shoots out laser pulses and measures distances to objects in a way that allows it to make maps in 3D space. We use similar scanners designed for surveying to map out utility assets for companies — in this case, as part of a fire mitigation program. We’re working with engineering companies and vegetation management companies to provide them with data to assist in the assessment of potential fire threat zones.” 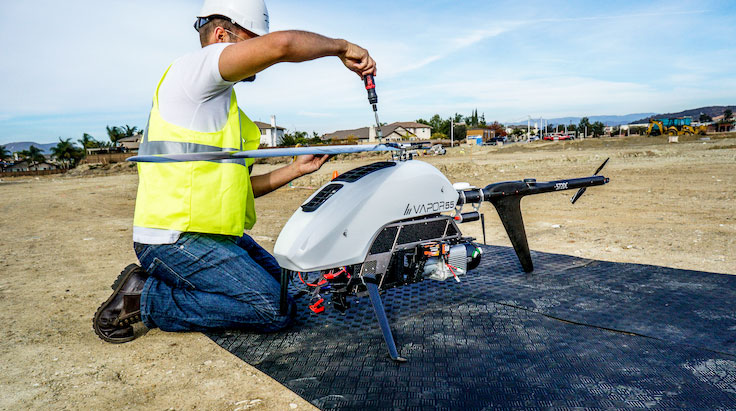 Ilgenfritz said that utility companies have long created maps showing the layout of power lines and electrical equipment and their proximity to trees and other forms of vegetation — which could result in fire hazards. However, before LiDAR-equipped drones came along, this was either achieved using ground surveys or — at best — snapping a few photos from a helicopter.

“Our drones shoot out a million laser pulses, compared to a surveyor who is shooting one image at a time,” Ilgenfritz explained. “The efficiency gain is therefore pretty significant.”

Using state-of-the-art RIEGL VUX-1 LiDAR detectors, the team creates detailed maps of the scenery and then uses forecasting and modeling techniques to predict how wildfires are likely to spread. As a result, they can gather deep data insights which could help prevent fires by, for instance, removing vegetation that would let it spread. Or, in the case of a fire, potentially offer other actionable data.

While it’s still early, the hope is that projects such as this one could help save billions of dollars — and people’s lives, too.

The folks at Disney Research get to work on a lot of fun stuff. From a so-called Force Jacket for heightened virtual reality experiences to a human-sized acrobatic robot, the team experiments with a range of offbeat ideas that sometimes lead to further development.

Somewhat curiously, the latest idea to emerge from its workshop seems to have more to do with maintenance work than entertainment.

The PaintCopter (as its name suggests) is a paint-spraying drone, though admittedly a rather clever one as it can apply specific designs to 3D objects as well as flat surfaces. The idea is that by painting surfaces using an unmanned aerial vehicle, we’ll be able to do away with the need for scaffolding, saving time and improving safety in the process. 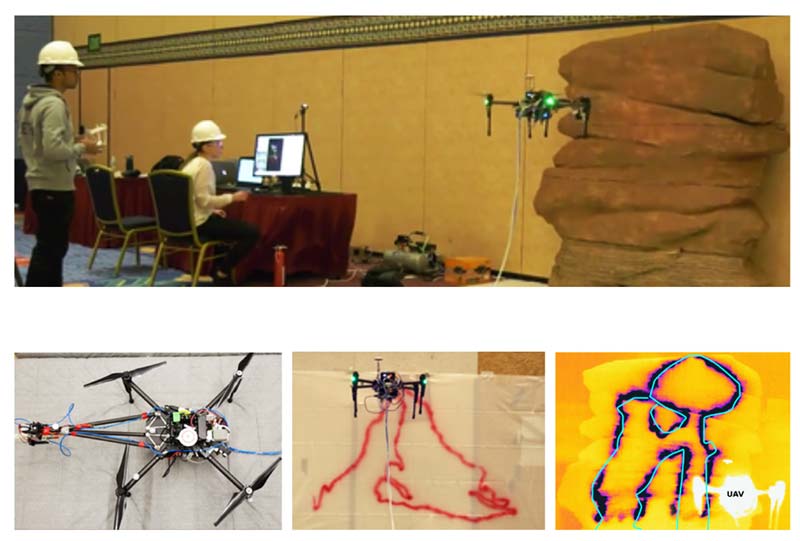 Instead of a battery, the quadcopter —  a modified DJI Matrice 100 — receives power via a cord attached to a source on the ground so it can stay in the air till the paint job is complete.

Likewise, instead of loading the drone with heavy containers full of paint, the machine receives the liquid from a tube connected to a large container that’s also back on the ground. The paint is applied to the target area via a nozzle fixed to the front of the drone.

However, it’s not just a case of sending the drone up and hitting the spray button. Disney Research’s technology enables the drone to carry out its task autonomously. Before the painting begins, the drone’s cameras map the target area as part of the preparation process. Using the collected data, the designers can then program how they want the paint to be applied, which could be a general “fill” or something more detailed such as line drawings. 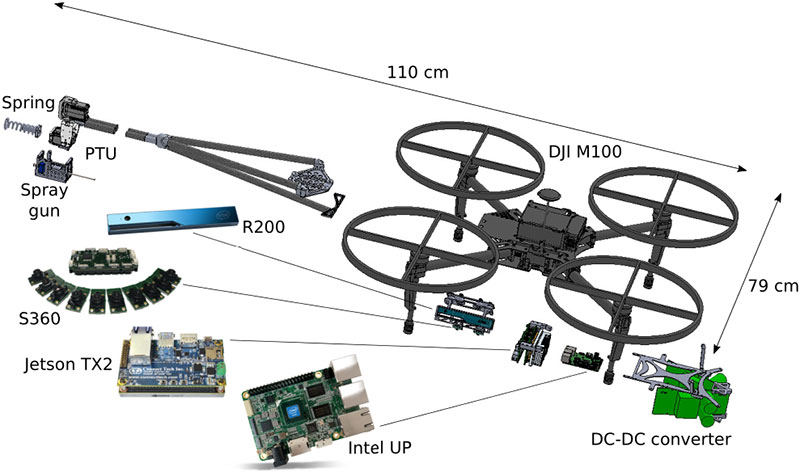 It’s not clear if Disney plans to use the technology to touch up some of its aging theme park attractions when needed or to market the system for commercial use. The design is nevertheless the latest example of the potential of drones to transform a number of industries.

In a move inspired by natural engineering, robotics researchers have demonstrated how tiny palm-size drones can forcefully tug objects 40 times their own mass by anchoring themselves to the ground or to walls. It’s a glimpse into how small drones could more actively manipulate their environment in a way similar to that of humans or larger robots. Winged creatures such as birds, bats, and insects can only lift objects that are about five times their own weight when flying. 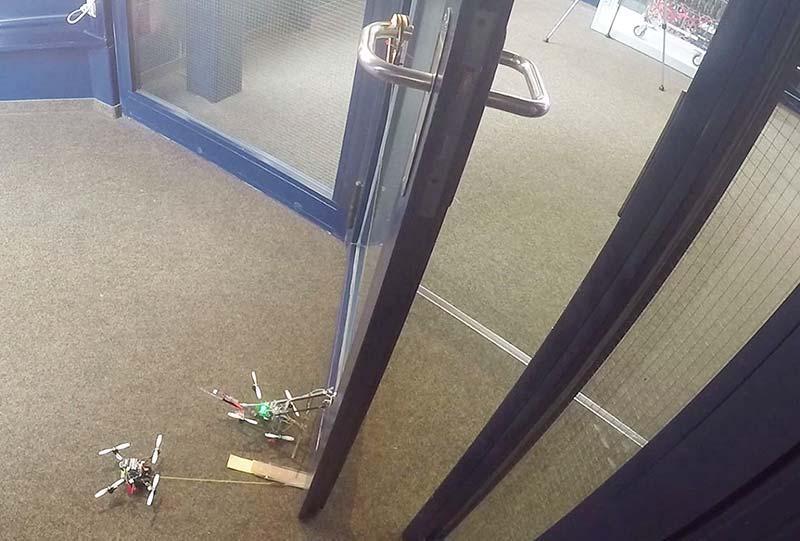 However, Matt Estrada, a Ph.D. student in mechanical engineering at Stanford University and his colleagues from Stanford and the École Polytechnique Fédérale de Lausanne, in Switzerland, looked instead to the practical approach taken by predatory wasps, which land on the ground to drag larger prey back to their nests. 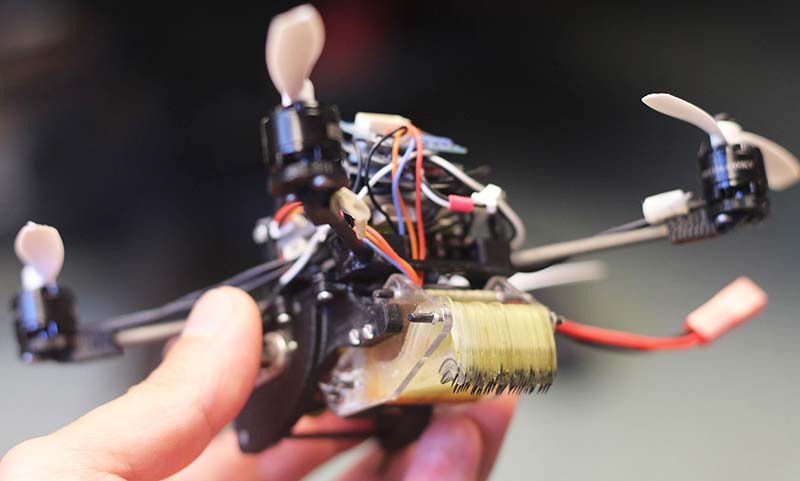 Each “FlyCroTug” drone has a specialized attachment at the end of a long cable that can be paid out and then pulled back in through a winch. That means the drones can attach one end of their cable to an object, fly off, land, and anchor themselves before hauling the heavy load toward them. What might normally be one small step at a time for wasps becomes one giant flying leap at a time for the drones, Estrada explained.

Experts are beginning to worry about how huggable social robots will influence human behavior — particularly in children and the elderly. If people turn out to be easily swayed by robots, the coming world filled with robot co-workers, caregivers, and friends could hand immense power to marketers, rogue programmers, or even just clumsy reasoning by robots. 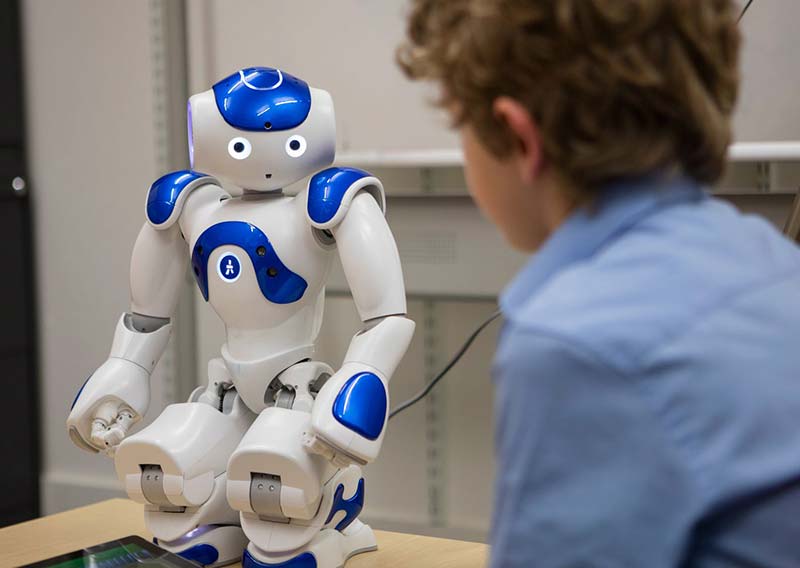 A new study published in Science Robotics reveals how easily robots can influence the judgment of children — even when the robots are clearly in error. This is raising warning flags for parents and anyone thinking about the need for regulation. In the experiment, two groups of children between seven and nine years old were asked to complete a simple task: Choose which two of several lines are the same length. One group did the task alone, and the other did the task while seated at a table with three autonomous robots that gazed at the same puzzle, paused, and answered the question incorrectly.

The children who faced misleading robot peer pressure did less well, and three-quarters of their wrong answers were the same as the robot’s bad answers.