Bryan Bergeron’s article in Issue-4 2020 “Alternative Computing Models: Part 2 Sliding Rules” brought back a lot of memories. The photo shows three of my slide rules. I bought the yellow Pickett Model N-500-ESI (identical to Figure 1 in the article) in 1967 and used it for two years of chemistry and one year of physics in high school. 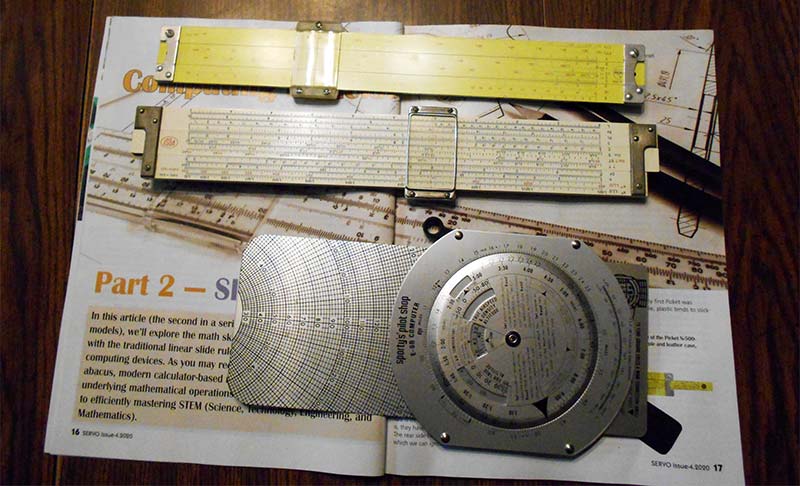 The white Post Versalog 1460 issued to us at the US Air Force Academy in 1969 for use in science, math, and engineering classes is actually easier to read than the Pickett. The E6-B circular slide rule (a.k.a., dead reckoning navigation computer) is used by aircrews to compute distance traveled, density altitude, etc., and has a sliding grid for calculating wind drift. These were all fun to use but have been superseded by electronic calculators and smartphone apps.

In the mid-70s, I purchased a TI SR-51 scientific calculator for $120 which was a lot easier than the slide rules, but had to be recharged frequently. The battery pack had to be replaced every two or three years (for the Professional Engineering exam in 1980, I carried the calculator, the charging wall wart, and my slide rule just in case).

In 1986, I bought a TI 36X solar calculator for $35 which was able to fit in my shirt pocket and never had to be recharged or have its battery pack changed.

In 1995, I bought a TI-89 Titanium programmable calculator for $200 which uses AAA batteries which have to be replaced periodically. What I really like about it is the equation stays in the memory so changes can be made without reentering all the numbers. You can see the whole equation so as to spot any entry errors.

Things I remember about the slide rule are: (1) you had to make sure the top and bottom scales lined up or your calculations may be in error; (2) you had to write down the equation and estimate the results to place the decimal point correctly; and (3) you could always tell the “geeks” (I was and still am one of the biggest) because they had the slide rule strapped to their belts.

One disadvantage of the calculator is that it will put out a wrong answer as quickly as it did a right answer. When I taught Engineering Technology classes, I always showed students how to estimate the results so if the calculator results were much different, they could spot an error.

Thanks for sharing! I know a lot of readers would love to share your memories.