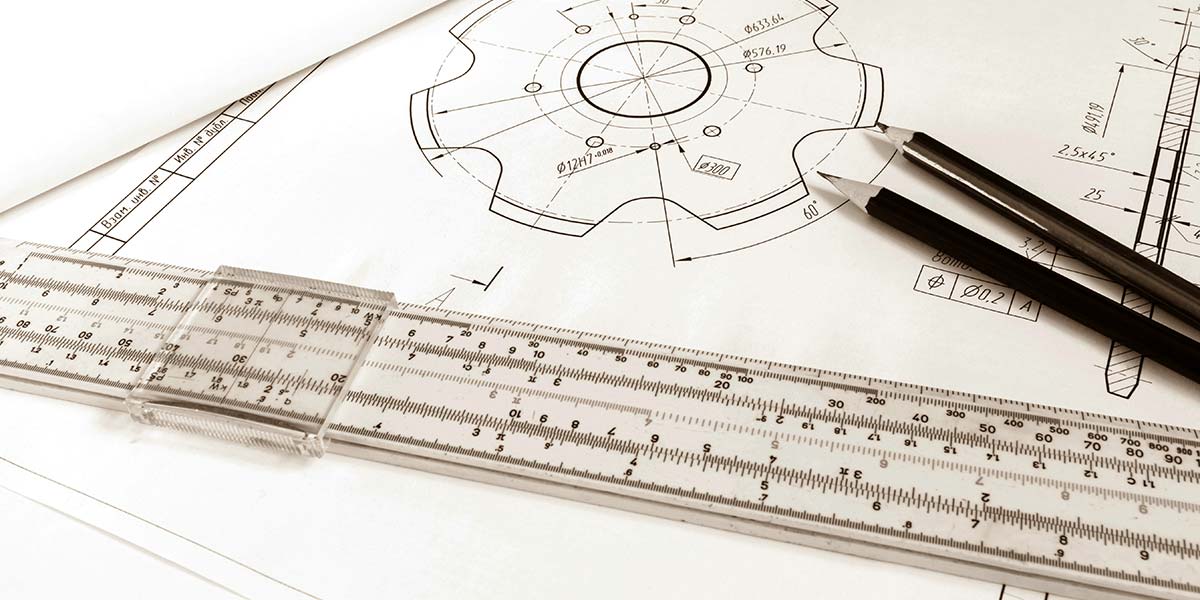 In this article (the second in a series of alternative computing models), we’ll explore the math skills you can develop by working with the traditional linear slide rule and related sliding rule computing devices. As you may recall from the first article on the abacus, modern calculator-based math insulates the user from the underlying mathematical operations and techniques that can be key to efficiently mastering STEM (Science, Technology, Engineering, and Mathematics).

The modern slide rule (based on sliding log scales or rulers) dates back about 350 years, shortly after John Napier discovered logarithms in 1614. Figure 1 shows the front side of my Picket N-500-ES slide rule. 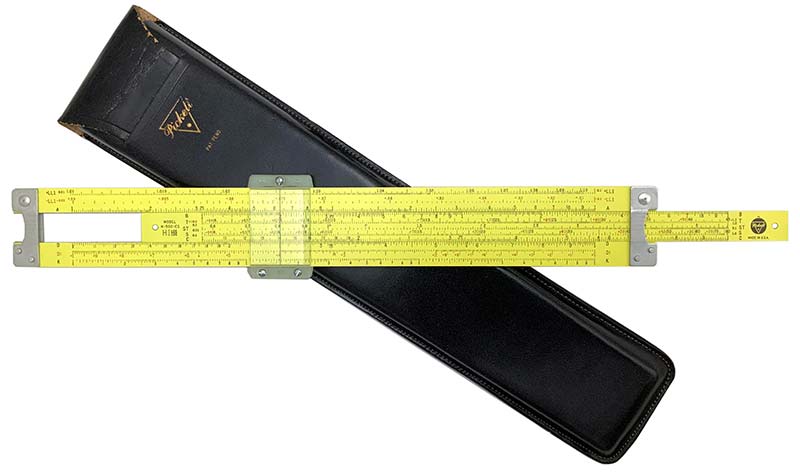 In operation, the movable slide is slid between the upper and lower fixed stators. The clear plastic cursor which, like the slide is free to move horizontally, contains a hairline that can be used to temporarily mark intermediate values.

The “ES” designation on some Picket rulers indicates that the slide rule is designed for “easy sight;” that is, they have a yellow background. The rear side has additional scales, which we can ignore for now. This 12” ruler is made of aluminum, but my first Picket was made of plastic. While more affordable, plastic tends to stick and therefore impede operation. Linear slide rules, such as the 500-ES as well as circular rules, have been used by engineers and scientists for centuries. I’d argue that circular rulers predate linear rules, especially if you ignore the need for log scales. For example, ancient sundials qualify for circular rules, in that they convert a position along an arc to local time. There’s also the little matter of the 2,000 year old Antikythera astronomical calculator that displayed the motion of the universe, the planets, phases of the moon, and the timing of solar eclipses.

The development of sliding rules or scales seems as inevitable as the development of the abacus. We learn to count using our digits, and the abacus is simply the equivalent of a ready supply of extra digits the have the same digital one-for-one correspondence with whatever is being added or subtracted. Similarly, we learn scale in using maps and architectural drawings that are “to scale.” A mile on a map may be represented by one inch, for example. One could imagine a one foot tall model of a pyramid in Egypt with proportions precise enough to serve as the basis for construction of the actual pyramid.

It’s almost impossible to overstate the importance of the slide rule in engineering over the past 300 years. The majority of the infrastructure around the world — from skyscrapers and jet planes to bridges and rocket engines — was developed by slide-rule-touting engineers and scientists. In the mid-70s, large engineering firms might have had an expensive desktop mechanical computer. However, most engineers eagerly accepted the handheld calculator and retired their slide rules — to the detriment of the scientists and engineers that followed.

From my perspective, the year was 1975 and I was fortunate to have learned the slide rule as part of my high school chemistry class. I say fortunate because by the end of that year, I owned an electronic calculator from Texas Instruments and retired my plastic Picket.

As a freshman engineering student, I worked and studied around students and professors who wore calculators strapped to their sides. There wasn’t a slide rule in sight. However, because of the limitations of my four-function calculator, I had to rely on tables of logarithms and trigonometric functions published in the 3,000+ page CRC (Chemical Rubber Company) Handbook of Chemistry and Physics.

Some slide rules are designed for general math, whereas others are focused on specialized areas such as electronics, aviation, medicine, astronomy, and warfare. For example, my Picket N-515-T slide rule shown in Figure 2 is designed for students of electronics.

FIGURE 2. Front and back sides of the Picket N-515-T aluminum slide rule, designed for students of the Cleveland Institute of Electronics.

The front of the slide rule has scales configured for common calculations such as capacitive and inductive reactance, and the back of the slide rule has notes and tables to support electronics calculations. You’ve probably owned or at least seen the common resistor value calculator where the colors on a resistor are reproduced and the total equivalent resistance is displayed in ohms.

Figure 3 shows a generic slide rule (my Picket N600-ES aluminum), designed for space and weight savings. At six inches long, it’s 50% of the size of a regular 12” slide rule. Next to the N600 is my Omega Speedmaster “Dark Side of the Moon” — one of the many modern variants of the original Omega Speedmaster Professional “Moon Watch.”

FIGURE 3. Front side of the Picket N600-ES aluminum slide rule next to an Omega Speedmaster with tachymeter bezel.

If you closely examine the bezel of the Speedmaster, you’ll see a Tachymeter scale marked from 500 to 60. In this circular slide rule, time is the variable where:

where t equals time in second.

Let’s say you’re at the Daytona 500 race and hit the stopwatch start button when a car of interest reaches the first mile marker. When the car reaches the second mile marker, you stop the stopwatch and read the MPH directly on the tachymeter. For example, if the stopwatch second hand lands on 120 (at the 6 o’clock position), then the speed is 120 MPH. At 9 o’clock the speed would be 80 MPH, and at 12 o’clock the speed would be 60 MPH. The scale can also stand for KPH or other units unrelated to cars and car speed.

As the tachymeter bezel on the watch illustrates, sliding scales are for more than basic mathematical operations. There are specialized slide rules and discs for doctors, pilots, astronomers, and dieters. For example, there are discs for calculating delivery date, drug dosage, and maximum dive time at a given depth.

There are star and planet locators based on local time, latitude, and longitude. Plus, there are BMI calculator discs that tell you whether you need to lose weight. Obviously, some applications of the technology are more important than others.

Hands On — Multiplication and Division

Back to the traditional slide rule, let’s look at rows C and D: the standard multiplication and division scales on most mathematical slide rules. First, study Figure 4. Notice that rows C and D are identical and that they are labeled from 1 (the index) to 10 with logarithmic spacing. That is, the space between 1 and 2 is significantly greater than the space from 6 and 7 or 7 and 8.

FIGURE 4. Overlapping C and D multiplication/division scales with the left index of the C scale on the 2 of the D scale. Intermediate gradations omitted for clarity.

With the index of C (i.e., “1”) over the 2 of row D, the slide rule can be used as a times 2, 0.02, 200, or 2,000 multiplier. It’s your responsibility to determine placement of the decimal point. For example, the problems and solutions supported by the setup in Figure 4 include:

Similarly, the setup in Figure 4 supports the following division problems and solutions:

In each of these division examples, the numerator is located on the D scale and the C scale is moved to identify the denominator. The result is read from the D scale. The scales are fixed in Figure 4, so we’re locked into a solution based on 2. In reality, the index would move as the denominator is matched with the numerator and the index would point to the appropriate answer.

FIGURE 5. Overlapping C and D multiplication/division scales with the left index of the C scale on the 3 of the D scale. Intermediate gradations omitted for clarity.

It’s identical to Figure 4 with the exception that the index or “1” in scale C is aligned with “3” on scale D. The multiplication and division problems and solutions supported by the setup in Figure 5 include:

As with the examples associated with Figure 4, the multiplication steps are straightforward. In division, the numerator is located on the D scale and the C scale is moved to identify the denominator. The result is read from the D scale.

Unlike in the mindless operation of a handheld calculator, with a slide rule you have to step in and estimate the scale and complexity of the result. In fact, the user manual for the Picket refers to user as the “calculator.”

Depending on the model, the scales on a slide rule can support a variety of mathematical functions. In addition to multiplication and division, the N500-ES supports the following mathematical operations:

These functions are as easy (sometimes easier) as the multiplication and division problems supported by scales C and D. For example, if you’re dealing with a circle and sphere problem, you’ll find the CF and DF scales useful — they begin with pi instead of 1. There’s no need to constantly relocate pi on the C or D scales.

Where to Go from Here

I hope I’ve at least sparked your interest in exploring the slide rule — linear or circular, and learning to think in log distances. Of note is that I chose a Picket slide rule to illustrate the technology simply because that’s what I’m used to. However, there were many brands produced over the decades in the US, Europe, and other countries.

If you’re searching eBay for a good used slide rule, consider Post, Dietzgen, Lawrence, Sterling, Gilson, and Keuffel & Esser from the US. Germany produced versions are from Faber-Castell, Aristo, Nestler, and Reis. Japanese slide rule manufacturers of note include the Hemmi, Rela/Ricoh, and Concise. England produced the Thornton and Unique slide rules. France offered the Graphoplex and Denmark marketed the Diwa.

Regardless of the slide rule you purchase ($20 will get you a decent aluminum Picket or bamboo Hemmi), consider the included manual as well as the excellent online, freely available “Oughtred Society Slide Rule Reference Manual.” When I use my slide rule and, to an extent, my abacus, I feel as though I’m doing my mental pushups.

Next up in the series is electronic analog computing. We’ll finally get to pull out the soldering iron and make something. Until then, good luck hunting for — and learning to use — a slide rule.  SV