For the past 8 years Rex Bionics, a company in New Zealand has been developing a robotic solution for wheelchair bound people to walk and move in an upright standing position. It is already available in their home country and currently being tested by Australia, and various countries in Europe. Rex Bionics is also seeking approval by the FDA for the US market.

The Rex Bionics Robotic Exoskeleton, called REX, is worn on the lower limbs by a mobility impaired user to walk, move sideways, turn around and to go up and down steps.

REX is sophisticated, yet simple to use and operate. The user transfers into REX in a seated position and is supported within the device by a series of leg braces, straps and a harness. Once secure the user controls REX with a control pad and joystick. REX’s power is provided by an onboard interchangeable battery pack.

Rex Functionality
The functionality of REX enables a user to perform, within a controlled environment, the following mobility functions:

Stability
Whether turned on or off Rex is stable, meaning the user can stand fully upright in a busy social setting such as a sports event or concert without concern that someone walking past will knock them over.

Because Rex does not require the use of crutches to stand, the user’s hands are free so they can cook, take photos, use a workbench, write on a whiteboard, and so on, knowing all the while they can step to the next activity, while remaining completely stable and in control.

Battery Life
When fully charged Rex can walk continuously for over two hours. Battery life will be extended if the device is stationary for periods of time, such as working at a bench or conversing with friends. To extend walking time it only takes a minute to change the battery.

Weight and Portability
Rex weighs approximately 84 pounds (38kg) however the user carries none of this weight.

If you are moving Rex around within your home or workplace you can walk the Rex beside you, driving it using the joystick. For transport to and from home you can sit it down in the back of a station wagon or possibly across the back seat of a car. 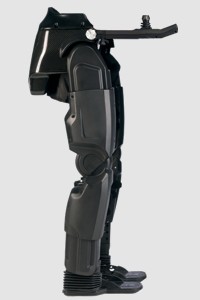 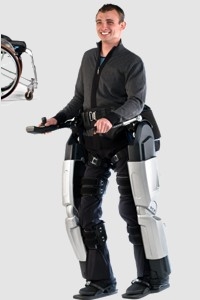