10.69 seconds is how long it took for a robot to shatter the Rubik’s Cube world record.  The robot, named Ruby, can solve the scrambled puzzle in just over 10 seconds, including the time taken to scan the initial status of the cube. It was built from scratch by six students as their final year project for the double degree in Bachelor of Engineering (Robotics and Mechatronics)/Bachelor of Science (Computer Science and Software Engineering). 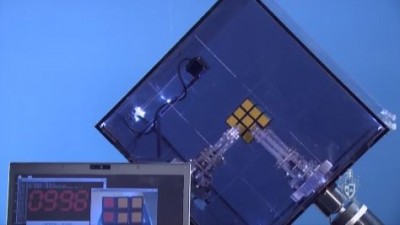 “The students’ combined expertise in robotics and software engineering enabled them to construct a robot with a fast computer vision-tracking system capable of very high precision movements and timings.” said Professor Chris Pilgrim, Deputy Dean of the Faculty of Information and Communication Technologies.